Sindh Government has announced Population Welfare Department Jobs 2023 the recent jobs 2023 for filling the vacant position in Population Welfare Department. Candidates can get all the information like application form Eligibility Criteria, Test Date, Interview Schedule and Candidates list when department announced check on here. The candidates who have the domicile of Sindh Province and fulfill the criteria and qualification they must apply for such jobs 2023 before the due date 2023.

Pakistan is one of the most populated countries in the world. It stands on number sixth. It became extremely essential for the government of Pakistan to setup a department which could control whole of the population increasing procedure. A specific policy was made by Population Welfare Department in 2002 for lessening growth of population till 2023. Population Welfare Department adjusts balance among the general public and resources. It also does necessary legislation in this regard. It has the authority to run various media campaigns for generating awareness for building public opinion. Further information explained below like vacant positions qualification and procedure of application submission. 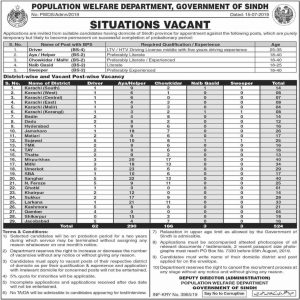 The posts are purely for PIU of CIP on a fixed Salary on a contract basis.

After scrutiny of documents suitable/eligible candidates will be called for test/interview.

Suitable/eligible candidates may apply along with all relevant testimonials.

Applicants are required to write the application on a plain paper. your application must have these attested documents: