Government of Punjab will be stop the result of Matric and Intermediate. Few day ago Education Minister announced the date of matric result. He said matric result will be declared on 14th September on Tuesday but recently government will stop the result. According to latest information Punjab Government postponed Matric and Intermediate Result due to pass and fail formula. Second problem is that the practical number are not included in this result. Previous result was biased on theoretical and practical number was not counted. 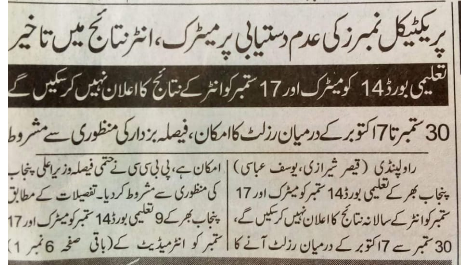 For this purpose Government of Punjab will be canceled the result of Matric and Intermediate. Government has not announced the date of result. Candidates visit our site on daily basis because when government announced the new date and any update we provide on this page as soon as possible. Hopefuly result will be announced between 30th September to 7th October 2022.