Home English Part of Speech in English Definitions and Examples

A part of speech is a category of words which have similar grammatical properties worlds that are assigned to the same part of speech generally display similar behavior in terms of syntax. They play similar roles within the grammatical structure of sentence and sometimes in terms of morphology in that they undergo inflection for similar properties. Traditional grammar classifies words based on eight parts of speech: the verb, the noun, the pronoun, the adjective, the adverb, the preposition, the conjunction, and the interjection.

What are the 8 parts of Speech

Each part of speech explains not what the word is, but how the word is used. In fact, the same word can be a noun in one sentence and a verb or adjective in the next. The next few examples show how a word’s part of speech can change from one sentence to the next, and following them is a series of sections on the individual parts of speech.

8 Parts of Speech Definitions and Examples 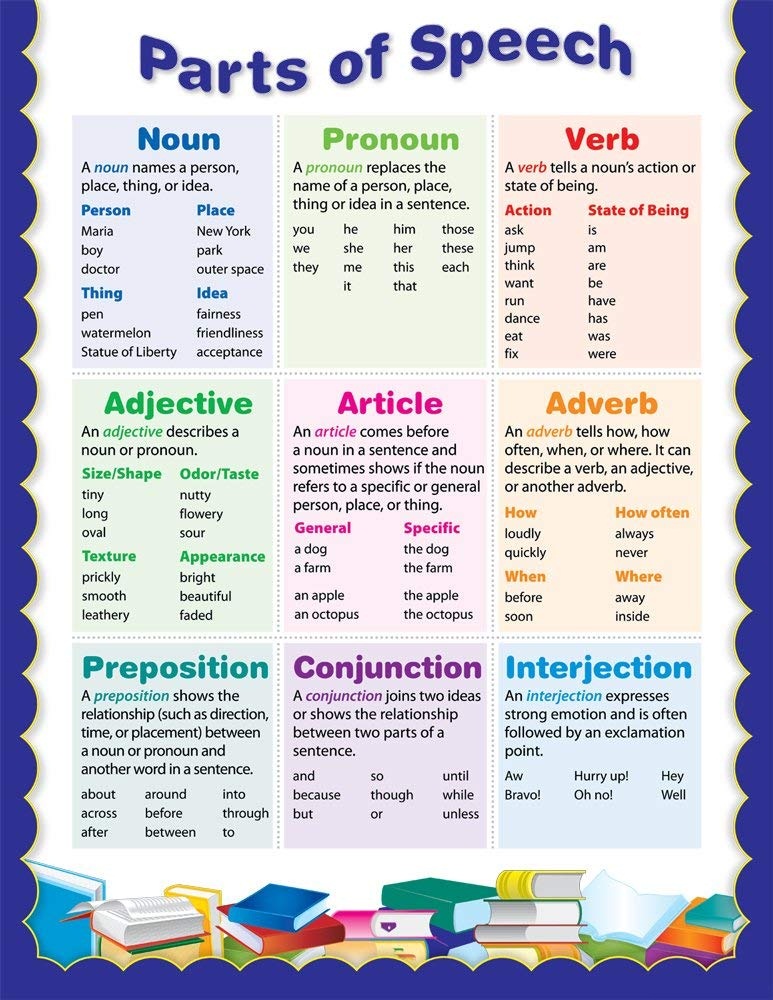 Nouns is an important part of speech which is used a lot in written as well as spoken English. “ A noun is a word that name a place, a person, a thing, an animal or an idia. A noun is a word for a person, place, thing, or idea. Nouns are often used with an article (the, a, an), but not always. Proper nouns always start with a capital letter; common nouns do not. Nouns can be singular or plural, concrete or abstract. Nouns show possession by adding ‘s. Nouns can function in different roles within a sentence.

An adjective describes, modifies or gives more information about a noun or pronoun.

An adjective is a word used to modify or describe a noun or a pronoun. It usually answers the question of which one, what kind, or how many.

The verb in a sentence expresses action or being. There is a main verb and sometimes one or more helping verbs. A verb must agree with its subject in number (both are singular or both are plural).

An adverb describes/modifies a verb, an adjective or another adverb. It tells how, where, when, how often or to what extent.

An adverb describes or modifies a verb, an adjective, or another adverb, but never a noun. It usually answers the questions of when, where, how, why, under what conditions, or to what degree.

Example sentences: I am usually busy. Yesterday, I ate my lunch quickly.

A preposition shows the relationship of a noun or pronoun to another word. They can indicate time place or relationship.

Examples: at, on, in, from, with, near, between, about, under

Example sentences: I left my keys on the table for you.

A conjunction joins two words ideas, phrases or clauses together in a sentence and show how they are connected.

A conjunction joins words, phrases, or clauses, and indicates the relationship between the elements joined. Coordinating conjunctions connect grammatically equal elements: and, but, or, nor, for, so, yet.

Example sentences: I was hot and exhausted but I still finished the marathon.